Monday's headline - Apple's iTunes is a victim of its own success 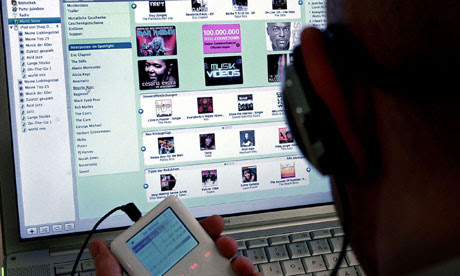 Apple's iTunes is a victim of its own success

Without iTunes' innovative micropayment system and its new way of selling songs one at a time, the iPod would have been just another commodity MP3 player. Instead, the iPod became Apple's "halo product" and the genre's king, with a lasting dominant market share (70% or more) and, in 2006, surpassing the Macintosh in revenues: $7.7B vs. $7.4B.

The iTunes-powered iPod rescued the company's image. Then teetering on the edge of insignificance, Apple came to be perceived as a serious contender.

This was nothing compared to the contribution iTunes was about to make to the iPhone. A song is simply a string of zeroes and ones, so is an app; the only difference is the destination directory (I am, of course, simplifying a bit, here). The well-debugged iTunes infrastructure turned out to be a godsend for the new Jesus Phone: The smartphone became an "app phone" and the rest of the industry followed suit. iTunes App Store downloads now surpass music traffic:

Today, the toxic waste of success cripples iTunes. There are times when I feel that iTunes has reached Windows Vista bloatware proportions: Increasingly non-sensical complexity, inconsistencies, layers of patches over layers of patches ending up in a structure so labyrinthine no individual can internalise it any longer. (Just like the Tax Code.)

iTunes' metastasis happened naturally as it tried to incorporate new packaging and delivery systems. The media â€" music, videos, apps â€" is no longer the message. iTunes gives you TV seasons, college courses, audiobooks, podcasts; it passes files between Macs and iPads, syncs devices, uploading and downloading everything through the Cloud ... and should we mention Ping, the unfortunate attempt at "social"?

iTunes has turned into an operating system â€" full of kludge and uglier than many â€" a role it was never meant to fill.

That's the line RIM and Nokia execs once took.

On the music side, do we like looking for music, managing it, fixing inexplicably broken playlists? Do we care for bizarre recommendations from the Genius? (No connection with the really helpful ones in Apple Stores.) Buying music from Amazon is easier, more informative, more pleasant â€" and downloads drop right into my iTunes library.

Admittedly, managing apps has become much easier â€¦ if you use Wi-Fi sync to a Mac or PC where the larger screen helps when you're sorting through dozens of programs (I'll confess that I hoard a mere 170 apps â€¦). But it still feels like it falls short of what an independent module, with its own tools and UI, should be able to do.

Things take a turn for the worse when it comes to transferring files between, say, an iPad and a Mac. The It Just Works motto doesn't apply. While Keynote documents sync automagically between an iPad and an iPhone, there's no such love between the iPad and the Mac. iTunes offers a kludgy solution, semi-hidden at the bottom of the Apps section, although I doubt anyone uses this method. Email and DropBox are faster.

The rumours of a new iTunes version (perhaps called 11, a versioning number increment that signals a major update) have rekindled criticism of the aging giant and invited suggestions for fixes or more radical structural changes. For a sampling, see iTunes: Time to right the syncing ship, Erica Sadun's TUAW post, and a counterpoint by Scott P Hall who thinks "iTunes is well structured, and easy to use". Most of us agree with pointed put-downs such as these (from Jason Snell):
Apple has packed almost everything involving media (and app) management, purchase, and playback into this single app. It's bursting at the seams. It's a complete mess. And it's time for an overhaul.

â€¦.
And let's be honest: iTunes is at its worst when it comes to app management. The app-management interface in iTunes is ridiculously slow. iTunes can fill up your hard drive with tens of gigabytes of iOS apps that can easily be downloaded from Apple. Syncing apps frequently destroys folders and makes apps disappear. The interface that shows where the app icons will appear on your iOS device is unstable, unreliable, and inefficient.

â€¦and from Erica Sadun (emphasis added):
iTunes is an unwieldy behemoth, slowly suffocating from its own size and age.

â€¦.
Forget about launching iTunes: music browsing and playlist selection (not to mention creation) needs to migrate into Spotlight (or some similar always-on feature). Tunes should be part of the computing experience, not a separate app.

Let's hope that "iTunes 11" does more than move furniture around and add another layer of patches. Personally, I'd vote for breaking it down into separate modules such as Music, Video, and Apps. This wouldn't rub against the Apple grain: There's the everything-in-one-app Outlook philosophy, and then there's the Apple practice of separating Mail, Address Book, and iCal. Also, breaking up the iTunes "monopoly" would make fixes and upgrades more manageable.

But there are two possible flaws in this line of thinking.

First, it assumes that the iTunes problem is confined to the client app, to the software we run on our desktops and devices. This isn't likely to be the case. We're no longer in the era of PC desktop software where patiently redoing the Mac OS foundation got us OS X. It's almost certain that many of the iTunes problems we experience in the client actually come from poorly designed applications in Apple's Cloud, running on noble but out-of-date architectures such as WebObjects.

A possibly more significant impediment is Apple's "Windows problem". As Allen Pike explains on his blog (pointed to by John Gruber), Windows is iTunes' ball and chain (emphasis added):
â€¦ they can't split iTunes into multiple apps because many, if not most iOS users are on Windows. iTunes is Apple's one and only foothold on Windows, so it needs to support everything an iOS device owner could need to do with their device. Can you imagine the support hurricane it would cause if Windows users suddenly needed to download, install, and use 3-4 different apps to sync and manage their media on their iPhone? It's completely out of the question.

I remember my surprise when I bought my first iPod mini and saw iTunes software running on Windows. Imagine, Apple writing Windows software! Good UI, runs well, doesn't feel like a dragging-one's-feet port. But there's a price: Some of the iTunes problems might stem from its use of cross-platform development tools, an approach that encourages (and sometimes insists on) a least common denominator experience. (I just checked, iTunes on Windows is very close to the Mac version.)

Allen Pike is right: iTunes, or its successor, must run on Windows. But I don't see how that's an unbearable burden on Apple, especially in light of the economics involved. If cross-platform tools are too limiting, Apple could develop "separate but equal'' versions of iTunes as a way to keep selling iDevices to Windows users. (On this topic, the iPhone/iPad maker has done a much better job catering to Windows users than what RIM/Blackberry and Nokia have done for Mac users.)

Let's hope Apple doesn't become complacent, that they aren't blinded by iTunes' spectacular numbers. Let's hope they deliver a really Apple-like iTunes experience. Paraphrasing a grand departed French politician, I like iTunes so much I want five of them.

Posted by RocoFuzzy at 7:58 PM